Recent events at the Jewish Museum Vienna – a summary

The month of February 2011 has seen a flurry of activity in and around the Jewish Museum in Vienna. The controversy surrounding the unusual method of dismantling the permanent exhibition for the purpose of modernising the building and renewing the exhibition has largely been conducted in German on Austrian and German websites and weblogs. The English-speaking world has thus far hardly picked up on the issues raised by the commentators in Europe. The following is an attempt to summarise events to date and outline the issues motivating the commentators and critics. 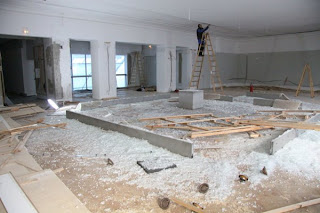 On 1 July 2010 the new director of the Jewish Museum Vienna, Dr Danielle Spera, took up office. One of her first projects was to be the necessary modernisation of the building and the development of a new permanent exhibition to replace its previous exhibition which was opened in 1996. At the beginning of February images of the destruction of the centrepiece of the previous permanent exhibition, a series of holograms featuring images relating to Jewish history in Austria, reached the press (see image_1; source www.juedisches-museum-blog.de). The publication of these images prompted museum professionals and critics across Europe to react in shock and disbelief at this violent dismantling of an acclaimed exhibition.
The issues raised by critics, first on the weblog of museologist and art historian Gottfried Fliedl (http://museologien.blogspot.com) and then in an open letter by a group of concerned professionals published on the weblog of the Jewish Museum Munich (http://www.juedisches-museum-blog.de/2011/02/10/entglittene-bilder/) concern the manner in which the holograms were dismantled and the implications this has for the history and the future of exhibition of Jewish history in Vienna. Questions regarding the future permanent exhibition were also raised, in particular as there appears to be no wider academically supported consultation process in advance of mounting a new exhibition.
Since the first week of February, critics and the Museum’s leadership have been involved in a series of public exchanges with the Museum seeking to defend its practice (http://www.jmw.at/sites/default/files/Faktenbericht_Geschichte%20einer%20%C3%B6sterreichischen%20Aufregung.pdf). While it appears that the Museum is able to publish its responses to the critics in the local Austrian press (for a selection of articles see here: http://diepresse.com/home/kultur/kunst/632936/Juedisches-Museum-zeigt-zweites-HologrammSet?from=suche.intern.portal), the critics largely have to rely on private weblogs and email exchanges to publicise their views.
The critics have consistently asked for more information about the reasoning for the violence used in dismantling the holograms, about the intention for archiving the previous exhibition, and about the plans for the new exhibition due to be opened in the autumn of this year.
The issues raised can be summarised as follows:
·      Was it necessary to destroy the holograms in order to remove them to make way for the modernisation of the main museum building (Palais Eskeles)?
The museum claims that it was technically impossible not to destroy the holograms, though no documentation has been produced to confirm this view. Felicitas Heimann-Jelinek and Martin Kohlbauer produced the concept for the holograms which were then produced and installed by an outside company. Whether the Museum solicited and received a report from this company regarding the safe removal of the holograms has not been made public. Further, it does not seem that there were/are any plans for archiving the previous permanent exhibition as is now curatorial practice.

If indeed it was impossible to preserve the holograms, the process of arriving at this conclusion should have been discussed and documented. 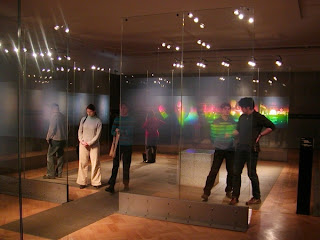